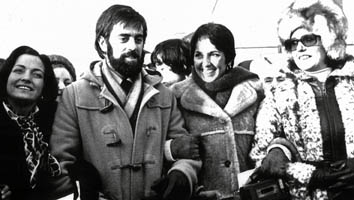 A Vision of the Future – Amanda Dunsmore

An exhibition in the series of artist positions “And One and Two and Three and Four.”

In 1977, two women, Mairead Corrigan Maguire and Betty Williams, were jointly awarded the 1976 Nobel Peace Prize. They were leaders of the Peace People, a movement they co-founded with journalist Ciaran McKeown. Amanda Dunsmore’s work picks up on this history of the Peace People movement (written by Ciaran McKeown, translated by TBC) in her audio installation, which is also directed into the public space. The installation in the showroom also features the publication PEACE BY PEACE and historical photographic material.

Amanda Dunsmore, lives and works in Ireland. A primary focus of her artistic practice is the exploration of potential future memory, the legacy of visual parity in portraiture, and the long-term socio-political implications of art making. Her work has been exhibited frequently in Ireland and internationally and she is a program coordinator and lecturer in Sculpture and Combined Media at the Limerick School of Art & Design.

Series of Artist Positions “And One and Two and Three and Four.”

This exhibition launches a series of artist positions that will be on view for two weeks at a time in the KunstRaum Goethestrasse xtd showroom. “And one and two and three and four” shows the positions of internationally active artists Anne Brannys, Amanda Dunsmore, Michael Goldgruber and Josef Ramaseder. Throughout the period from August to October 2019, an “archive” allows to explore further works of all artists.

Additional opening dates “And one and two and three and four” :

THE WORLD AROUND ME – on view at the LENTOS Kunstmuseum until August ...
Scroll to top