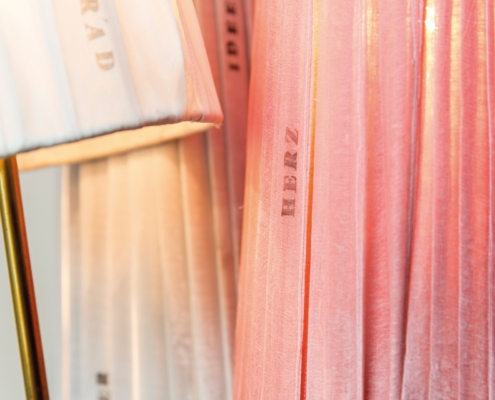 Design projects by KunstRaum Goethestrasse xtd, which are based on shared workshops, integrate all participants in the process of developing contents, techniques and realizations. The methods are adapted to the
shared aims and to the needs of the participants. Workshops with the residents of the Wohnhaus Neuland Wien
(EN: residence Neuland Vienna) were carried out on site and aimed to design a part of their living area.
The first step was to collect wishes and ideas of what the residents wanted for their living area and where they
would like to participate in the design. Playful methods were used to work out the essential needs and desires.
The residents of Neuland Vienna wanted a comfortable community room, which they could used individually and
together during every season. The functionality and the design were then developed together in further workshop units, depending on the residents’ concentration abilities and how much they could cope with.
An unused attic space was thus turned into a salon in the style of living rooms from the 1970s, which was to serve
as an oasis of relaxation. The walls were decorated with pictures individually developed by the residents in workshop units. In addition, used table and floor lamps were newly covered and decorated with words and statements
contributed by the residents. The space was supplemented with used furniture and chandeliers, reading material
and slippers, so that people could take off their street shoes.
The method of speed-drawing was used to create the central design element in the space, a specially made
textile wallpapers. Everyone was invited to suggest motifs that they all drew then. These drawings were the
starting material for the wallpapers. A part of the drawings resulting from this exercise was then translated by KunstRaum Goethestrasse xtd into the design of the wallpapers. For this, the project leaders from
KunstRaum Goethestrasse xtd used their knowledge of the language of forms to create a composition of the
drawings, drawing from the tradition of products and product design, in this case the style of wallpapers from
the 1970s. This kind of design requires a sense of the craft and the materials, as well as the purpose the product is
ultimately to fulfil. 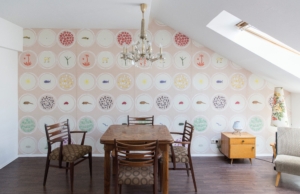 WHEN THE SUN BREAKS THROUGH THE CLOUDS, THERE IS LIGHT
Scroll to top